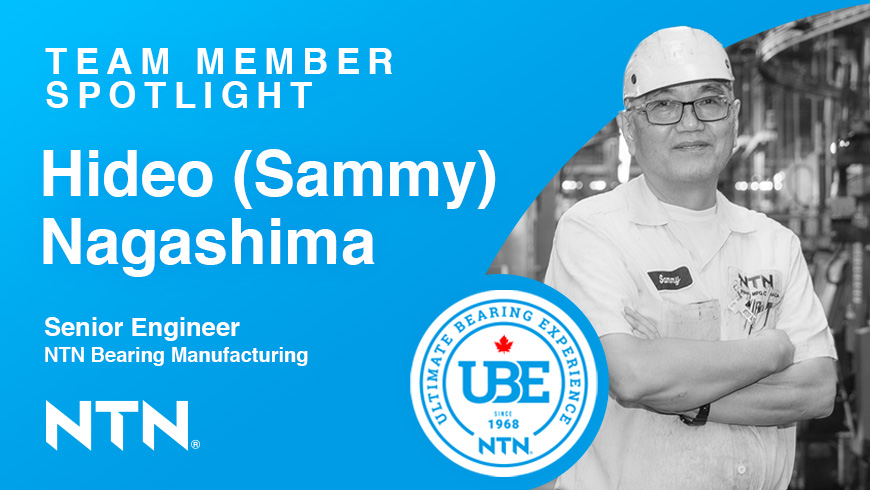 As the Senior Engineer of NTN’s Canadian manufacturing team for radial ball bearings, angular unit bearings and rocker arm bearings, Sammy is responsible for engineering creative projects, daily production numbers, maintenance, tooling, production quality, team member development, and communication with support teams on special projects. With all these responsibilities, Sammy brings a strong work ethic and sets a positive culture in his area—which has been reflected in his team's production output.

Sammy joined NTN’s Iwata (Japan) plant in 1971, at the young age of 17. NTN was the biggest company in his home town, Iwata, and he was driven by his passion to work for a manufacturer that creates new products either directly from raw materials or components. After being stationed in Japan, he applied to work internationally and was promoted to an Engineering role at NTN Bearing Corporation of America’s Mount Prospect Sales Office in Illinois. He returned to Japan after this assignment and was later reassigned to an international engineering role at NTN Bearing Manufacturing Canada based in Mississauga, Ontario, a position he has held for over 40 years.

Throughout his five decades of engineering experience, Sammy has served in various capacities—process engineering, quality engineering, environmental compliance, and manufacturing analysis. As Senior Engineer, Sammy focuses on projects and systems that help internal functions operate more efficiently. Sammy offers a unique perspective as someone who has extensive international experience yet also has deep roots to our Canadian Manufacturing facility.

In 2005, NTN Canada added a brand new production line to its manufacturing operation, angular unit bearings. Sammy was involved in leading this change and developing the operational procedures for the new equipment, overlooking the plant expansion and combining rotating shift work to ensure the team members could efficiently incorporate the new production line into their work centers.

Andrew Gidge, Vice President, of CMF describes Sammy as “having a great mindset, with the ability to exceed expectations”. “In addition to the improved efficiency over the years, Sammy's leadership has boosted morale. He also is paying it forward, both as a mentor to new employees and supporting new projects and opportunities for CMF. Sammy drives results with a culture that people want to be a part of, and I am honoured to be working with him."

In his spare time, Sammy enjoys golfing and with his retirement on the horizon, he looks forward to spending quality time with family traveling to new and exciting places. His first stop will be Australia and New Zealand as he has never traveled there and looks forward to experiencing the stunning natural landscapes.

Sammy says NTN has changed a lot over the years. “Localization of manufacturing operations has led to new innovative styles of management. The teams I have worked with have been very supportive so you can work on something completely new in a team atmosphere. We’re all learning to work together efficiently and make improvements together while keeping in mind that to make high quality bearings, we need good people and quality training programs, not just good machinery. Effective manufacturing training supports the learning curves and increases production quality standards.”

Sammy's ability to take on every challenge with a great attitude is inspiring to the whole team. His impact is more than words can express, and we appreciate all the hard work and focus he puts into delivering the Ultimate Bearing Experience to end-users of NTN’s bearing products.