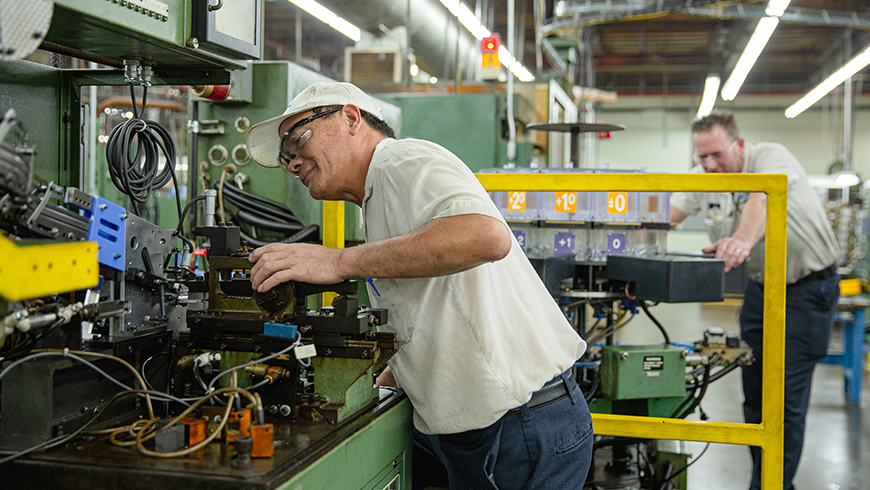 Beginning on December 16, 2019 NTN Bearing Manufacturing Canada will add a new product line for tenter clip 6202-40 bearings. Sharing the same internal design as the 6202 bearing, tenter clip bearings have an outer diameter that is 5mm thicker and are used in tenter clip film stretching machines for receiving and gripping thermoplastic films. A tenter clip is the mechanism that clamps onto the edges of the plastic sheet as it travels through the transverse direction orientation used to produce plastic items such as shrink sleeve films.

To set up the tenter clip bearing production system for maximum efficiency, one option under consideration was to change over the existing E-Line at NTN Bearing Manufacturing of Canada, also known as our 6202 bearing production line, to accommodate the fabrication of this new bearing. Given that the outer diameter of the tenter clip bearing is 5mm larger, it was found that this approach would require extensive modifications to the machining and material handling processes with an anticipated change over time frame of at least one week to complete.

An alternative solution would be to change over the F-line, also known as the 6203 bearing production line, as this bearing shares the same outer diameter as the 6202-40 bearing. Consequently minimal changeover would be required to adapt the existing machining and material handling systems to accommodate the new product.

A plan was finalized to construct the inner rings using the 6202 inner ring E-line production process, while utilizing the F-line to produce the new bearing’s outer rings. Final assembly of the tenter clip bearing would take place on the F-line assembly system. And to realize further efficiencies with the changeover, existing assembly equipment was rebuilt and integrated into the F-line to accommodate the 6202-40 tenter clip production line to further reduce the changeover period from one week to one shift. The manufacturing efficiencies realized with the production of the 6202-40 tenter clip bearing will help cut costs, improve throughput and reduce environmental impact.